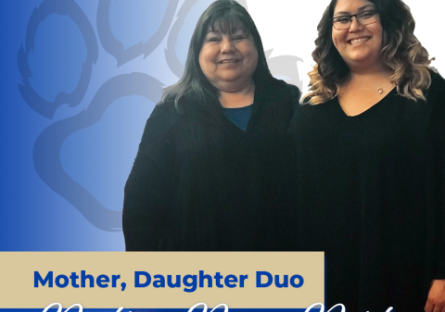 Ana Chandler grew up living and breathing education from a very young age. Her mom, Norma Chandler, was navigating life as a young working mom and earning her degree simultaneously. As a Hispanic first generation student, Norma fell in love with the community college setting. Everyone was welcoming and encouraging, creating a strong sense of community she had never experienced before.

As Norma earned her associates degree from PVCC, Ana and her brother were fixtures at Norma’s group study meetings, school-related outings in and around Phoenix, as well as regular visits to campus. While running a company with her husband and going to night school, Norma developed dependable relationships with her instructors who inspired her to continue her education.

“Education was tugging at my heart,” Norma recalled of her early days as a student. “I wanted to work for a college and one of my PVCC professors helped me figure out what I would have to do to make it happen.” She went on to complete her bachelor’s in Marketing from Arizona State University and MBA in Project and Process Management, also from ASU.

Norma accepted a short-term position in academic advising at PVCC and while job shadowing she said she knew “This is where I belonged.” Over the next two decades, Norma has had leadership roles in Academic Advising, Career Services, Early College, Veteran Services, and Student Care and Conduct. Norma has also taught college success and business courses at PVCC. In 2014, Norma earned her Doctorate in Education with an emphasis in Higher Education and Adult Learning.

As a huge advocate for community college, Norma ingrained the benefits of community college into Ana, so as Ana grew and began thinking about her own path, it was these same rewards that finally drew her in.

At her mother’s urging, Ana signed up for classes at PVCC after high school, and was introduced to many of Norma’s colleagues who became consequential role models for Ana. A self-described ‘bad student’, Ana was unsure what she wanted to do with her life and discovered similar support and guidance from the student support staff.

While earning her associate’s degree, Ana was involved in various clubs and programs at PVCC, taking on leadership opportunities, including emerging leaders, a peer mentor program, and the Serve, Learn, Inspire, Change, and Educate (SLICE) program. After completing her two-year degree, she continued at her father’s alma mater - New Mexico State University, earning a bachelor’s degree in Communication.

“Community college and my professors prepared me very well. I was over prepared going to New Mexico,” Ana recalled.

At NMSU, Ana gravitated towards communication and counseling, and discovered transformative mentors that continued to shape her. Not only did they encourage and believe in her, but they lifted and empowered her. She found joy in leadership and being a part of another strong community.

“I knew my purpose was to help people, I just had to find my niche.” she said. And she did, back home at PVCC.

Since 2012, Ana has worked in a variety of departments including Disability Resources, Recruitment, three years as an academic advisor at the Black Mountain campus location, and the last seven years in the Early College program ACE. Achieving a College Education (ACE) is a scholarship program for first generation students, helping them discover a path to higher education.

“My proudest moment is the work Ana has done in the ACE program,” Norma said. “I got to see her in a whole new light.”

“The ACE students give me a purpose,” Ana said. “They are always the students you want to be in higher ed for. They just really appreciate the opportunity.”

Today, Norma works as manager of PVCC’s Student Care and Conduct department, which provides students assistance in accessing resources to help them be successful inside and outside the classroom. This includes connecting students with academic, financial, and personal concerns with college and community resources.

In 2019, Ana accepted a Student Services Analyst position at PVCC’s sister school Scottsdale Community College and continues her work with ACE, but stays connected to her PVCC family. In 2021, Ana earned her Master’s of Education degree in College Counseling and Student Affairs. Currently, mother and daughter are both Women Rising co-advisors at their respective colleges, and Ana is also co-president for employee representation.