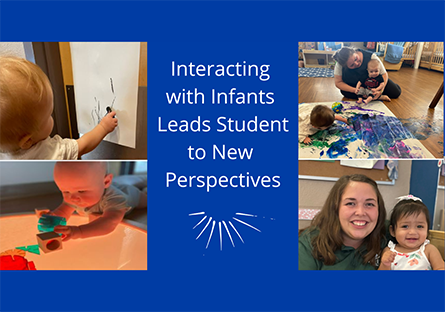 PVCC Early Childhood Education student, RaKay Gross has spent her life caring for babies in various settings. When she became a lead infant teacher at United Cerebral Palsy Early Learning Center, she thought she knew everything she needed to know about caring for babies. She was even called a “baby whisperer.” She knew the importance of tummy time, reading, talking and following the baby’s lead in play time. She realized, however, that if she was going to pursue a career in Early Childhood Education, she needed to further her education. Upon a coworker’s recommendation, RaKay decided to enroll in PVCC.

Fast forward, RaKay is in her third session as a participant in PVCC’s Collaborative Educators Institute (CEI) and is also an intern at the United Cerebral Palsy Early Learning Center. She has led two activities with infants at the Learning Center that provided the opportunity to study and evaluate them. The first, focused on using charcoal. RaKay says, “I barely offer my infant’s crayons and markers because they put everything in their mouths. I quickly noticed that the babies were so intrigued by the material. They would stare intently at their hands, make a mark on the paper and look at me as if asking “do you see this too?”, and rub their fingers along the marks, smudging it all over the paper. Upon realizing how interested and engaged they were, I was more free in the way I offered it. I put huge sheets of paper on the ground and put the babies in the middle of the paper. This encouraged them to use their whole bodies in the movements with the charcoal.”

The second activity RaKay did was introduce a new group of infants to a light table. She explains, “we used the light table primarily on the ground with an array of loose materials such as, items from nature, translucent blocks, bags of paint, and kitchen containers. They quickly noticed that the materials changed with the lights. They would stare at them so intently and look back to me, almost for confirmation. When I changed the colors they would look at each material, I think they were noticing that the changing colors changed the color of the material. They eventually noticed that the light table knobs  were what changed the color and they started turning the knobs on their own. They would turn the knobs and look at the table and look at me.”

RaKay says observing the infants interact with the charcoal and the light table provided her with new perspectives. In addition, her early childhood classes at PVCC and participation in CEI have led her to view her job in a new light. She says, “Of course, basic care and being sensitive to different needs is important, but I have begun to trust my infants as co-learners in our world who deserve to be treated as such. I think we can all learn a lot from the way infants interact with the world and the materials we have to offer them if we take a step back, follow their lead, and give them the freedom to explore and learn.”

Upon completing her Associate of Arts in Early Childhood Education, RaKay plans to pursue a Bachelor’s degree. She says, “I would eventually like to be involved with either coaching, assessing, or being an environmental specialist to help teachers provide high quality spaces for their children to thrive in.”